Bradford County Approves Titanium Mining On 800-Plus Acres Of Land 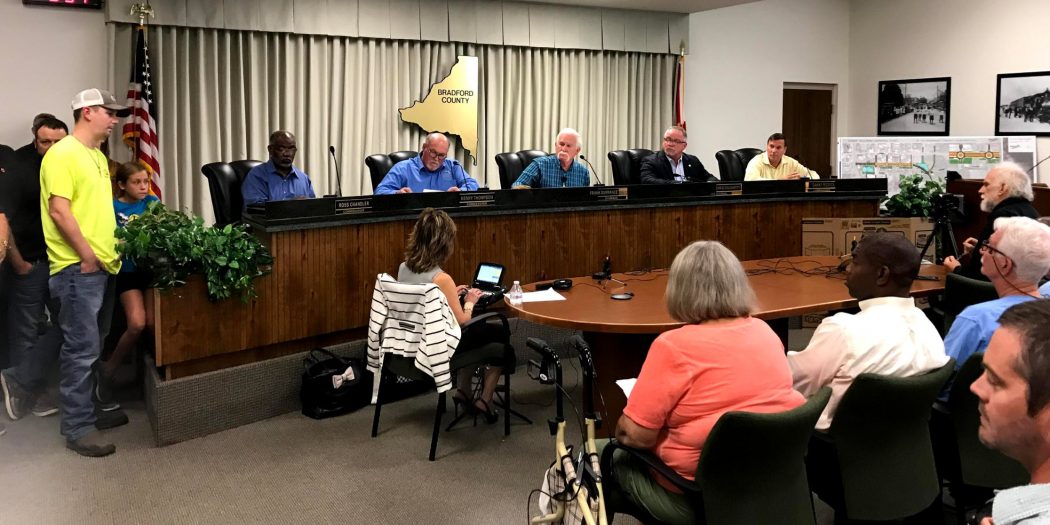 Bradford County Commissioners voted 3-2 to allow The Chemours Company to mine for titanium in the county. (Parker Fluke/WUFT News)
Bradford County Approves Titanium Mining On 800-Plus Acres Of Land

Bradford County Approves Titanium Mining On 800-Plus Acres Of Land

OSFR was well-represented at this  meeting about which we will soon have our own post.

We feel this board of commissioners acted with an incredible lack of discrimination, information and science regarding the issue.

Read the original article here at this link to WUFT News.

The Bradford County Commission on Thursday night voted 3-2 to approve a permit allowing titanium mining within its borders.

The Chemours Company proposed a special permit in September to mine on 886 acres of land.

The Bradford County Courthouse’s commission hall was packed with concerned citizens for the meeting and decision. The line outside the hall wrapped around the door and through the hallway, leading some to criticize that not everyone could hear or see the meeting fairly.

One attendee, Paul Still, read off the deficiencies in the permit, imploring the commission to table the vote. After they chose to approve it, Still thought they made a mistake.

“It was my opinion that that permit application was insufficient, and did not adequately provide for protection of the environment,” Still said.

A large number of attendees questioned the notice of the public hearing, as well as aspects of the permit.

Most Bradford County residents heard news of the meeting through the county telegraph or local flyers. Carol Burton was one of the women who distributed those flyers, and was disappointed in the minimal notice for the meeting.

“I just think that the citizens of Bradford County were let down by their commissioners because it was not put clearly in the paper,” Burton said.

Burton represents the Citizens Against Phosphate Mining Group. The group’s attorney, Heidi Mehaffey, wrote a letter to the commissioners explaining that the deficient notice failed to comply with Land Development Regulations.

Commissioner Danny Riddick, one of two to vote against the proposition, wanted to represent his district with his decision.

“I have nothing against either side, I have friends that work for Chemours, but I’m also the commissioner for District Four, the side where all of the lakes are dry….”

Members of Our Sante [Sic.] Fe River alledge  [Sic.] that the Florida Department of Environmental Protection has issued a consent order to Chemours Company for multiple violations @WUFTNews