The following article in the Columbia County Observer by Stew Lilker indicates some progress may finally be made after years of controversy, criticism, finger pointing and stalling.

Your writer lived next to the park for 16 years and saw these issues over and over.   We note that this meeting, requested for years by the residents, was granted only after major decisions on the changes and renovations had been made by the commissioners and after much of the work was finished.

Nevertheless, many important decisions remain to be made, and it seems that the commission may be headed in the right direction.

Our thanks go to Stew Lilker for permission to publish his article, which can be seen here in the Columbia County Observer. 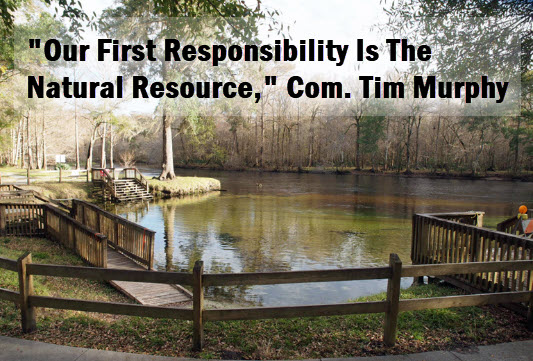 COLUMBIA COUNTY, FL – For decades, Columbia County’s Rum Island Park was ignored, vandalized, in disrepair and despair. Last fall, with the election of District II Commissioner Rocky Ford, the Columbia County 5 is paying attention to both the park and the citizens that care about and use the park.

According to Assistant County Manager Kevin Kirby, Columbia County is spending about $300,000 on park upgrades, which include restrooms, new docks and board walk, and a major bank restoration. Electricity is also being brought into the park.

Rum Island Park is located in the south end of Columbia County on the Santa Fe River.

Last Tuesday evening, March 3, after years of requests from citizens to hold a workshop about Rum Island Park, Commissioner Rocky Ford organized a workshop in the Fort White Community Center. It was well attended and productive. 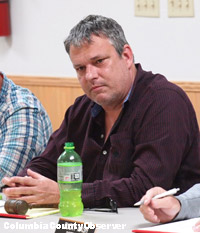 County 5 Chairman Toby Witt gave everyone an opportunity to be heard.

County 5 Chairman Toby Witt waived the county’s problematic 2 minute speaking rule, as most folks can generally say what they have to say in 3 minutes, and other than a couple of speakers and one commissioner, most kept their remarks to around 3 minutes.

Chairman Witt turned the meeting over to Commissioner Ford, who greeted everyone, “I appreciate everyone showing up for the meeting. I know you have been waiting a long time for this.”

Commissioner Ford said, “I’d like to hear what you have to say about this. What are your ideas?”

Resident John Sterpe came prepared with written recommendations which included, closing the park on all major holidays and closing it to vendors three days in the middle of the week. Mr. Sterpe also suggested a graduated fee schedule and that service dogs be allowed in the park.

Alachua resident Steve Scott said, “Something’s got to change… People walk all over the place and dump their trash… I think you ought to charge out of county people more to use the park.” Mr. Scott was supportive of the work the County is doing to restore the park. 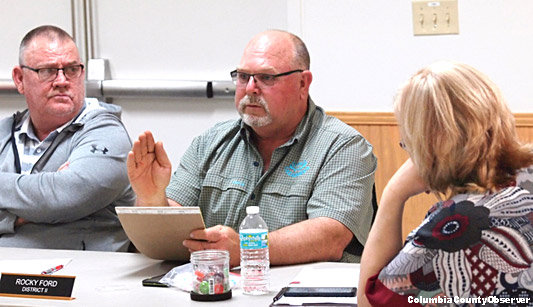 Commissioner Ford shared his thoughts about current problems and cures:

• Box at the entrance for a voluntary contribution.

Commissioner Ford said, “Everyone has an issue with the outfitters.” He wanted to levy a $1500 a year permit fee, except in the summer on weekends and holidays.

• Will put a host camper at the park who will be responsible for opening and closing the park; picking up the garbage; and making sure the rules are followed.

Commissioner Ford explained that if folks don’t want to clean up their stuff, the host would “call the Sherriff Department.” 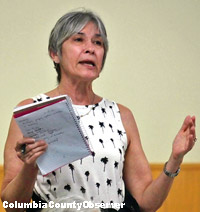 Kristin Rubin recommended “No Parking” signs along the roadway.

Doug Jipson of Rum138 said, “There is an issue with ingress and egress. That’s got to be solved. You are getting overloaded. There are way too many cars parked in there. You are going to have to limit the cars.”

Mr. Jipson is also an outfitter and the co-owner of Rum138, which is on the road leading into the park. He said that on the really busy days his lot is filled with the cars of the people he takes down to use the river.

Clint Pitman said, “The signs the County installs and directional arrows at the park are stolen.”

Your reporter, who lives a couple of miles from the park, has been asking the County to install security cameras at the park for years. “Are you guys going to finally put up video cameras so that you can monitor what is going on?”

Jane Blaise, a member of Our Santa Fe River said, “Every single person that goes in there is an impact… It’s not about money, it’s about the springs.”

Daryl Steinhauser said, “I live by Rum Park. None of this is new… I’m a little confused why we hash this out over and over again.”

Commissioner Ford said, “What I’ve proposed is pretty much the model of every park that I’ve spoke to.”

Commissioner Williams said the park is too small for the amount of people that want to use it. He recommended having a paid person there seven days a week. 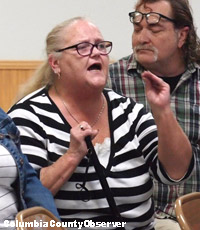 Linda Curtis commented about the fees, “I am not a rich person. I can barely pay three dollars for gas to get there… Mr. Ford, I’ve rented from you. You know I don’t have money… I don’t think it’s fair that the Friends of Rum Island [an independent group that regularly cleans the park) have to pay. We should get a volunteer pass.”

Kristin Rubin said, “No parking signs on the road up to the park would be a deterrent to parking along the road… I have people coming up to me all the time asking me, ‘When is Rum Island going to be open?'”

The County 5 Weigh In 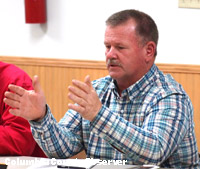 Chairman Witt went over the proposals; agreed with them; pointed out that “The volunteers should receive a pass to use the park.”

Commissioner Nash added, “I would start with $5 a car. The locals could get a $20 yearly pass. (Volunteers would be able to enter the park.) You’ve got to come up with a way to deal with the ingress and egress. When somebody comes up and the park’s full, the person there can refer them to park and ride [Rum138].” 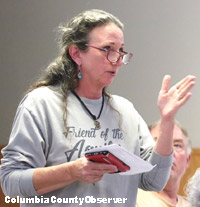 Commissioner Murphy said, “That lady in the corner hit the nail on the head. I think our first responsibility, number one, is the natural resource that we got.”

Merrillee Malwitz-Jipson added, “There are lots of outfitters that come in and use the park,” and added, “People are moving here so that they can use the park.”

Commissioner Murphy said, “Merrillee and Murphy are on the same page.”

Commissioner Ford moved that the County install a fee box; use a host camper; post ingress and egress signs, and install security cameras.

The motion passed unanimously and the County 5 will meet again in the South End to go over the rules and future plans.

Commissioner Ford wrapped up the meeting, “This has been a problem for years and we are heading in the right direction to do something about it.”

The folks at the meeting gave Commissioner Ford and the rest of The 5 a round of applause.