This Is Coming To Florida Water Mismanagers Take Note

The following article from the  Guardian should terrify our water mismanagers who live for the day and not for the public interest.

‘If there’s no water, what’s the point?’ Female farmers in Arizona – a photo essay

Arizona has the highest proportion of female farmers – but conditions in this dry desert landscape aren’t easy, and rural isolation has created a tapestry of challenges

By 9am, it’s already 100F (38C). In the desert afternoons, rain gathers on the horizon, teasing – and then it disappears. There is so much heaviness, so much waiting.

I pulled on to the ranch of Anastasia Rabin with Audra Mulkern, a Washington-based photographer and founder of the Female Farmer Project. We were on assignment for a story and chasing a statistic: according to the most recent US census, Arizona is the state with the highest proportion of female farm operators. 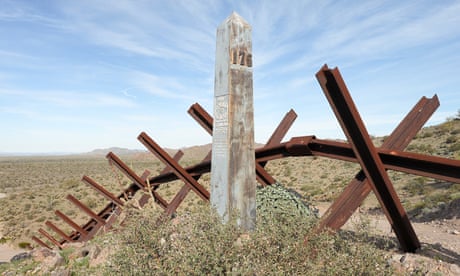 At Anastasia’s, we shadowed her on her daily chores – as she milked the goats and then walked them out on the range to browse the desert brush. And she introduced us to Jo Geerdes, her 78-year-old neighbor and mentor. At the confluence of their stories, we felt the pull of possibility: the potential for mentorship between female farmers and the return of a much-needed business for southern Arizona. And we felt the harsh clip of reality: the human cost of food production amid an arid landscape being sucked dry of its groundwater.

For Audra and me, their story has lingered.

Anastasia Rabin, 39, ranches on a 160-acre piece of rangeland in Cochise County. The land is scrubby, flat, dry – dotted with creosote bushes and spindly mesquite trees. On the horizon are the silver silhouettes of grain silos.

In Arizona, 45% of principal and secondary farm operators are women. Nationally, that same statistic is 30% – a total of 1 million women operating farms or ranches on more than 62m acres and generating $12.9bn in annual agricultural sales.

Farming does not respect personal boundaries, exhaustion levels, or breaking points. It is a lifestyle, a spilling over of beauties and emergencies – sick animals, bolting crops, impending freezes, equipment failures, last-minute orders – and all of the coinciding human actions and emotions.

A farmer cannot ever fully leave her farm.

Anastasia admits to needing solitude – even craving it during times of high stress. But rural isolation has also created a tapestry of challenges, some of which she says have been harrowing.

There is no one to depend on, to help with chores, to hold the wire taut while repairing a fence, to share in the beauty and risk of the operation. To put down a sick animal. Within this space, Anastasia has fought to acquire the vast knowledge and skills necessary to survive: marketing, agronomy, lease writing, computer skills, accounting, and animal husbandry.

Just a quarter-mile down the road from Anastasia lives Jo Geerdes, aged 79. When Jo and her late husband, George, moved to Elfrida in 1977, their four sons were school-aged and wild. The transition from the midwest to the desert was shocking.

Suddenly, the roads were not held in by trees. They learned to watch for rattlesnakes. They could see dust storms and monsoons from miles away. At first they grew hay. But three years after the move, they erected a metal building and opened George’s Custom Meat Processing, becoming the area’s go-to family-owned slaughter and custom butcher shop.

In the past few years since George died, Jo and Anastasia have cultivated a close friendship necessitated by living on the range alone as women. They look out for one another. They butcher turkeys and hogs together. When Anastasia had to attend a wedding in New York, Jo hemmed the bottom of a $9 thrift-store evening gown. It was gold and gorgeous, Jo says, clasping a hand to her chest. “Ana looked so beautiful.”

Agricultural apprenticeships are regarded as one of the most important and effective ways to transfer knowledge, skills and land to new generations of farmers. Because it is estimated that 70% of farmland will change hands in the next two decades, it has become more urgent than ever to connect young farmers with retiring farmers in order to keep land in agricultural production.

When Jo wrenches open the metal door to George’s, it’s as though the building lets out a small sigh – the ghosts of people and animals who have passed through, the love between Jo and George as they stood beside each other for 35 years, the meticulous dedication that each had for the operation.

Each piece of equipment is immaculately kept – the kill pen, the skinning hooks, the scalder, the smoker, the vintage scale.

It is as though time has stopped: knives are sharpened and laid out on a cloth; a tidy desk holds records and hand-kept books; rubber stamps are hung just-so, depicting each cut of meat. There is not even a layer of dust.

As the years have ticked by, Anastasia has begun unofficially apprenticing with Jo, desperate to soak up her immense bank of slaughtering and butchering knowledge.

As their friendship has grown, they’ve begun talking about partnership opportunities or creative financing so that Anastasia can reopen George’s.

But just before we visit, on the same day that Jo celebrated her 39th anniversary on the property, her well failed for the first time in its history.

Here in Cochise County, temperatures spike to 110F in the middle of June. The long growing season supports extra plantings of cotton and alfalfa, and hay dries quickly once it’s been cut.

Nuts grow well here, too – heat-loving pistachios, almonds and pecans. But these crops are particularly thirsty, and they pose an interesting resource issue for Arizonans.

Anyone who lives here knows you don’t buy land in Arizona – you buy water. That water is quickly being bought by housing speculators: mega-billionaires looking for agricultural tax write-offs, and almond and pistachio farmers flocking from drought-stricken California.

Even foreign agricultural companies have begun to appear. Perhaps the most shocking example is the Saudi dairy company that purchased 17 miles of Arizona desert for alfalfa production, only to ship the alfalfa back across the ocean for feed.

Amid this frantic land grab, small-scale farmers and ranchers like Anastasia and Jo face an uncertain future. With the additional demand on groundwater imposed by outsiders, the aquifers are being depleted at nearly double the rate they once were, which has experts wondering how many more years of commercial agriculture Arizona can support.

As wells are beginning to go dry, farmers are left with two options: spend tens of thousands of dollars to drill deeper – or get out now.

“Do you have water to drink?” Anastasia asks Jo, as we stand in the quiet of the meat cutting room. She leans against a long stainless steel table. “Have you been able to shower?”

Jo shrugs and cracks a joke about bathing in a bucket. But there is worry in Anastasia’s voice, and a palpable anger at the situation. What will they do out here without water – to drink, to cook, to grow gardens, to water livestock? What will happen to the land value?

Jo’s sons keep trying to move her back to the midwest. “What are you doing out there, Mom?” they ask her. She has trouble answering them any more.

“If there’s no water, what’s the point?” Jo asks us. Her voice is somber, defeated. We do not answer, because we do not know – how do you pull water from a stone?

Should Jo and Anastasia leave their land and abandon their plans, it is a loss that extends to the entire community, whether it is realized or not. Not only do we lose a solution to the bottleneck in meat processing options, but it is a missed opportunity for the transference of knowledge and skill – a loss that is impossible to quantify.

Since we visited, in June 2016, Jo sold George’s to a local rancher, but she has been able to continue living on the property. Anastasia has scaled back her operation to a homestead level.