South Florida Wildlands Executive Director Matt Schwartz sent the following email which is an excellent overview of what has happened with the infamous M-CORES folly.   This saga was followed very closely by your historian from the first kick-off meeting in Tampa to the last public-input Zoom meeting.  This was a fine example of the shenanigans and game-playing, time-wasting, money-wasting, chain-jerking, ram-it-down-your-throat,  favor-granting, power-abusing,  good-ole-boy, acting-without-thinking, worst-of-Tallahassee political activities.

It was even worse than Matt Schwartz writes, not only was the State of Georgia kept in the dark, it was rumored that Florida Secretary of Transportation, Kevin Thibault was not even consulted before plans were made.  But once he knew, boy did he jump in!

Meetings were ostensibly to examine pro and con aspects, but no con aspects were allowed to be discussed:  it was always emphatically shall we build it  or shall be build it?

The numerous public comments were overwhelmingly against, but the numbers for and against were never revealed.  As time progressed and it became evident that public comments were almost all against, the meetings were set up to make it more and more difficult for the public to comment.  Comments were pushed to the end of the day and jumping in the meeting near the end was sometimes not allowed.  Plug in your phone at 9:30, join the meeting and let the phone run until  after 4 o’clock or later at which time you could speak.

So this was an abuse of power by those in charge and the issues were not presented fairly nor objectively.  We have no  proof but it seems likely that favors  for future or past payments were promised to those who stood to gain tremendous financial windfalls.

On Thursday night, Florida Governor DeSantis signed SB 100 into law officially ending the M-CORES highway project across more than 300 miles of rural Florida. The campaign to stop this environmentally damaging project began more than two years ago when the legislation which created it, SB 7068, first surfaced. South Florida Wildlands joined many like-minded folks and devoted enormous resources to the campaign to stop these new highways. A big thanks to all of the groups, organizations, elected officials, and members of the public whose collective voices helped end M-CORES and create the new legislation.

Though M-CORES and all of the funding earmarked for the project are now history, SB 100 was unfortunately not the 100% repeal we would have liked to see. Legislation that would have done that, SB 1030, never made it out of committee. Our comments below discuss the pros and a few cons of the new legislation, along with some thoughts about M-CORES and the process which created it.

M-CORES (Multi-use Corridors of Regional Economic Significance) mandated three new toll highways be constructed spanning rural corridors across the entire western side of the Florida Peninsula. See the map at the bottom of this email for the corridor locations. Amazingly, no reviews or public-comment period as to the need for the project or its fiscal or environmental impacts were ever conducted prior to its approval by the Florida Legislature and Governor DeSantis in 2019. Yet it was one of the most massive public works projects Florida had ever seen and would have required billions of dollars in funding. It also would have transformed remaining swaths of rural Florida and wildlife habitat into something unrecognizable.

Probably SB 100’s best feature is that it completely killed the M-CORES Southwest Florida Connector – from Collier to Polk County and through the core habitat of the Florida panther. Given South Florida Wildlands’ focus on the panther and the wildlife which shares its habitat, this is where we concentrated the bulk of our efforts. We got a big boost when a FOIA request we filed with the U.S. Fish and Wildlife Service turned up an email by a transportation biologist who expressed candid remarks about the project. Though not intended for the public, the email did represent the views of a federal biologist regarding the potential for severe impacts from M-CORES. Excerpt here:

“This was known previously as the Heartland Expressway. I had seen this proposal several years ago, but it went away. It is now, possibly, rearing its head again. This project would have very serious impacts on the Florida panther (basically a disaster for the panther as it goes through, and would open up for more development, some of the best and last remaining habitat for the panther) as well as other fish and wildlife resources and the environment.”

To be clear, South Florida Wildlands’ objections to the M-CORES project were always along the same lines expressed by the biologist – new highways don’t just destroy, degrade, and fragment the wildlife habitats they pass through. They act as major catalysts for growth and sprawl all along their routes. We always believed that the main motor behind M-CORES was to make remaining rural lands in Florida ripe for development. That was euphemistically referred to as “revitalization of rural communities” on the M-CORES website.

The Northwest Florida Suncoast Connector is also largely dead as a result of SB 100. This M-CORES highway would have extended the lightly-used Suncoast Parkway to the Florida-Georgia border – 150 miles of new highway cutting through Florida’s “Nature Coast” and its many springs, wetlands, public lands, and habitats for dozens of endangered and threatened animals (Georgia’s state government expressed shock when it first learned of the project in the press). By contrast, SB 100 would allow sections of new highway to be built in this area only “as necessary to achieve free flow of traffic on U.S. 19.” But in Northwest Florida, a very rural portion of our state, we believe the “as necessary” part may never be established. And if some sections of U.S. 19 are eventually converted to limited-access highway – possibly as bypasses around small towns like Perry or Chiefland – that is very different than the nutty new 150-mile highway to the Florida-Georgia border that M-CORES envisioned.

The one piece of the M-CORES project that did survive the new legislation is the Central Florida Northern Turnpike Connector, extending the Florida Turnpike from its current terminus at I-75 (near The Villages – one of the fastest-growing areas of the U.S.) to the Suncoast Parkway. The new version described in the SB 100 bill doesn’t specify an endpoint for the extension but refers only to “a logical and appropriate terminus as determined by the Department of Transportation.” That’s not good and environmentalists will have to be vigilant about what gets proposed. However, the bill does require that a report on the project first be submitted to the governor and legislature by December of 2022. Any authorization for construction and state funding will have to consider cost, environment, and other impacts. And there will be opportunities for the public to weigh in. By contrast, M-CORES was a done deal from start to finish – only the specific routes through the three corridors were left open.

With the exception of some powerful interest groups which supported M-CORES – the Florida Transportation Builders Association, Florida Trucking Association, Florida Ports Council, Asphalt Contractors Association of Florida, and phosphate giant Mosaic – we’re happy that Floridians got this one right and almost universally opposed M-CORES. The bulk of M-CORES now goes the way of the Cross-Florida Barge Canal and the Big Cypress Jetport – two other Florida boondoggles that never got built. Perhaps the legislators who backed M-CORES underestimated just how fed-up Florida residents are with burying their state’s natural beauty and biodiversity under more and more concrete. It was certainly interesting when Florida Secretary of Transportation, Kevin Thibault, joined an M-CORES task force meeting and compared M-CORES to the “great accomplishment of the Florida Turnpike of the 1950s.” Whatever vision of the state Floridians might have embraced back then, they are clearly not embracing continued 1950s-style sprawl in the 2020s.

As we pointed out to the task forces many times, the slogan “people are coming – we have to be ready for them” is a poor excuse for trashing the natural heritage of the state people are coming to.

SFWA works hard to protect wildlife and natural biodiversity in South Florida and sometimes beyond. The COVID pandemic had no effect whatsoever on projects that would develop Florida’s remaining wildlife habitat – and neither has it impacted our conservation work.  Though this will be our farewell email on M-CORES, we still have a big plate of projects in front of us. They include tens of thousands of acres of new development proposed for primary and secondary Florida panther habitat in Eastern Collier County, the crisis concerning Florida manatee mortality, and Burnett Oil’s proposals to open oil fields in the incomparable Big Cypress National Preserve. Tax-deductible contributions to South Florida Wildlands are what allow us to continue our work. Please give generously at the link or mailing address below.

Thanks again for your support, and best regards, 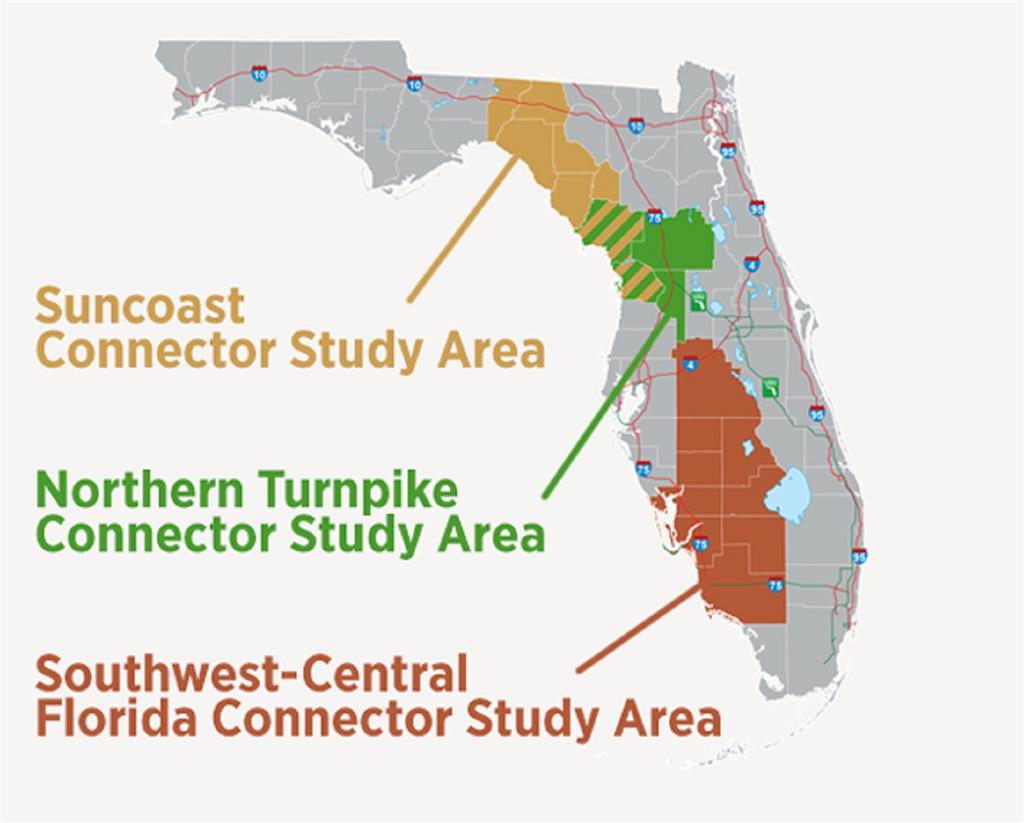 Map showing the three M-CORES corridors – and how much of Florida would have been impacted had these highways gone through as planned. Image courtesy the Florida Department of Transportation. 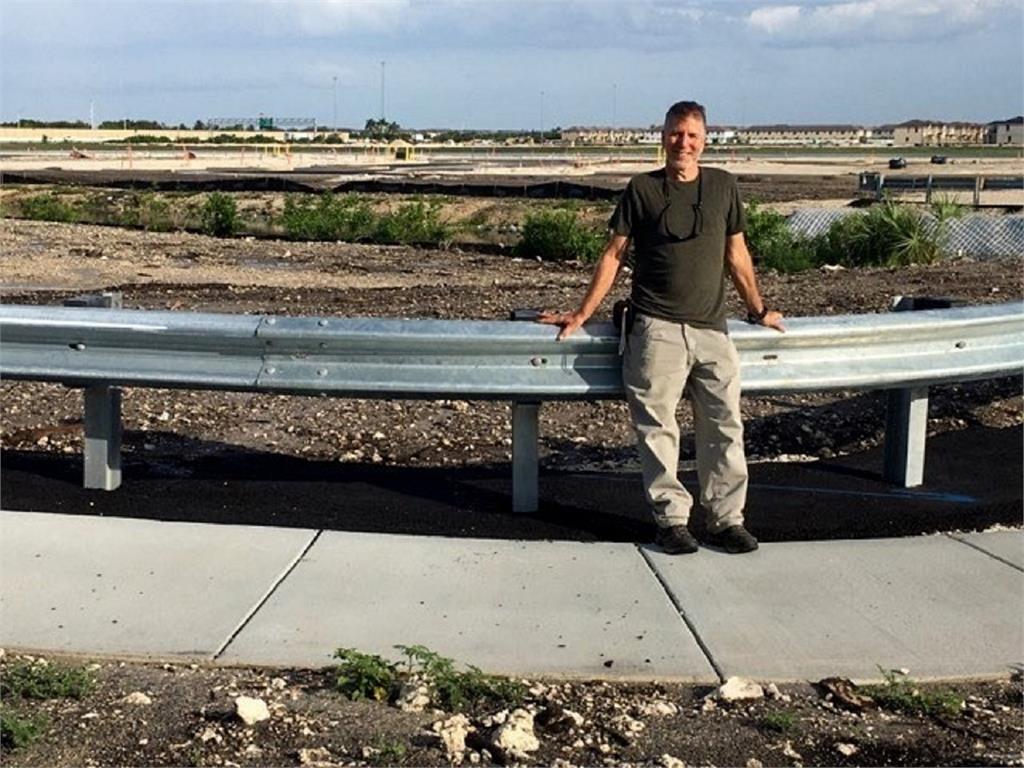 South Florida Wildlands Executive Director Matt Schwartz near a sprawling new development being constructed east of the Florida Turnpike in Miami-Dade County. Much of the land surrounding the Florida Turnpike was rural until fairly recently. This was the likely fate for many undeveloped lands and wildlife habitats in the vicinity of the M-CORES highways had this project gone through.