Earthquakes are happening in Florida and the U.S. Geological Survey is looking at the oil industry for the cause.   If you don’t believe in coincidences, continue reading.

Earthquake researchers are sending additional sensors to the area around south Alabama and the Florida Panhandle where five earthquakes have been detected in three weeks. The government researchers are trying to determine whether the quakes are related to oil and gas operations in the area.

Justin Rubinstein, a geophysicist for the U.S. Geological Survey, said USGS is working with the Geological Survey of Alabama and researchers at the University of Memphis to deploy seismometers around the area that will provide more information if additional quakes occur. Some of the instruments are already in place and more will be installed this week, Rubinstein said.

“The USGS, along with state agencies, both in Florida and Alabama, have been taking a look at these earthquakes, and trying to understand what exactly is going on in that area,” Rubinstein said. “We’re getting these on the ground and when we have more instruments in the area, we’ll be able to better understand what has happened.”

Rubinstein is the deputy chief of the USGS’s Induced Seismicity Project, an effort to understand the role between oil and gas extraction and the usually small-scale earthquakes that have skyrocketed in frequency across the central and eastern United States since about 2014.

According to the USGS, from 1973–2008, there was an average of 25 earthquakes of magnitude three and larger in the central and eastern United States. By 2014, that number shot up to more than 600. The USGS calls these induced earthquakes, rather than natural quakes, as they are likely connected to the expansion of oil and gas operations made possible by hydraulic fracturing, or fracking.

The area where the quakes occurred is one of 21 areas highlighted by USGS as likely experiencing more seismic activity due to oil and gas operations.

A 2015 publication by the USGS included Brewton, Ala. as one of 21 areas that have seen an uptick in earthquakes that are thought to be related to oil and gas extraction operations.

Though there is a natural fault line running through the area, part of the Bahamas Fracture Seismic Zone, there were hardly any earthquakes reported in that area prior to 1997, when several quakes, including one that was estimated to be magnitude-4.9 struck near Brewton.

That was Alabama’s second largest quake ever recorded, and a paper published in 1999 in the peer-reviewed journal Geology found that the quake was not consistent with purely natural causes.

The authors, Joan Gomberg of the USGS and Lorraine Wolf of Auburn University, wrote that natural causes couldn’t be ruled out entirely, but that they would be “difficult to reconcile,” with the series of quakes, which occurred at very shallow depth in geology not usually associated with earthquakes.

While the number of earthquakes experienced in the central and eastern states has risen dramatically since the fracking boom that began around 2008, it isn’t actually the fracking mechanism that is believed to cause most of the quakes.

The process, a method of extracting oil and natural gas from underground deposits that were not easily reached with conventional drilling equipment, injects water mixed with chemicals into underground wells to jar loose the oil and gas, which is captured at the surface. This, in effect, creates many micro-earthquakes, designed to shake loose oil and gas deposits for extraction.

However, according to the USGS, it’s the disposal of drilling wastewater that is most clearly linked to the increase in earthquakes that can be detected. Drilling operations, conventional or fracking, generate millions of gallons of wastewater contaminated with salts or fracking fluids. That wastewater is often pumped deep below the surface into underground formations below the water table to avoid contamination of ground or surface water.

Michael Manga, a professor of earth and planetary science at the University of California, Berkeley whose areas of expertise include fluid mechanics and geophysics, explained the phenomenon to AL.com in 2015 after a series of small earthquakes in Greene County.

‘It sounded like dynamite’: 16 earthquakes in Greene County since November

“It felt real funny, man. I felt it in my toes. I don’t what it was, but I know one thing: something shook,” Eutaw area resident Home Powell told AL.com Thursday morning. “You could hear it; it sounded like dynamite. It wasn’t just a little old something. It was big.”

“We understand the physics very well, and have for decades. By injecting fluids, the pressure of fluids in the ground goes up,” Manga said via email. “High pressure makes it easier for faults to slip. You can think of it a bit like lubricating faults. And there are small faults everywhere.”

The Greene County quakes calmed down after a several months. The county experienced 21 earthquakes in nine months from November 2014 to August 2015, but has seen just two since. Both of those occurred in 2016 and both were magnitude 2.6 or smaller.

The Geological Survey of Alabama has previously said the 2019 Escambia County quakes fall within the range of “normal seismic activity.”

Alabama is not near a plate boundary, like California, where two plates grind together. Quakes here occur as a result of intraplate faults, where opposing geologic forces create stress on the interior of a plate, which can be released in earthquakes.

There are minor, ancient fault lines running through Escambia County, Alabama on into Florida that are part of the Bahamas Fracture Seismic Zone, an unstable geologic area sweeping from south Mississippi, Alabama and the Florida Panhandle toward the Caribbean.

The zone is associated with occasional small quakes, and at least one big one, according to historical records from 1781, when an estimated magnitude 6-7 earthquake reportedly damaged a fort in Pensacola, ripping gun racks from the walls of a barracks and destroying at least one house.

However, in the 1999 paper about the Brewton quakes, the researchers note that those historical reports should be taken with a grain of salt.

“[R]eports of a hurricane at the same time make this record suspect,” the authors state. “Preexisting faults may have been reactivated during the 1997 sequence, making the events not truly random.” 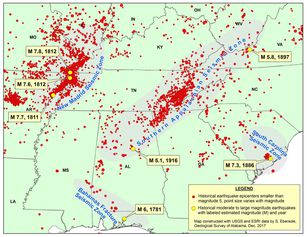 Alabama shakes: Small earthquakes are common but potential for a big one exists

Alabama’s fault lines cause frequent small earthquakes, but have the potential to cause much more damage.

For now, researchers will wait and see if there are additional quakes near the Flomaton/Brewton area to see whether the new instruments will provide more information on the cause of the quakes.

“The short answer is we don’t know,” Rubinstein said. “Certainly there isn’t historically a lot of seismicity in the area, but there is a history of seismicity.

“This is common throughout the country. Even even in areas where you don’t expect earthquakes, there are earthquakes from time to time. So, it is possible that these earthquakes are natural.”