OSFR shares the grief and sadness with the environmental world for this irreplaceable loss.

(Gainesville, FL)  Sierra Club Florida officials have announced the passing, after a brief illness, on November 4 of Richard “Whitey” Markle, one of Florida’s staunchest and most successful environmental advocates.

Best known for his successful efforts to restore, protect and preserve Florida’s natural resources as a principle of the Florida Sierra Club at both state and local levels, Markle’s tenure as Chair of the Suwannee-St. John’s Group representing 16 counties in North Central Florida brought his substantial energies to the Sierra Club’s efforts to protect, preserve and enjoy Florida’s world-class environmental treasures. 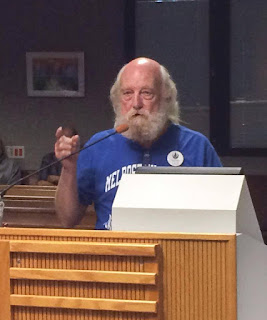 Also serving on the Sierra Club’s state Executive Committee, Markle’s sometimes “in your face” style earned both the respect and dedication of a cadre of conservation advocates who saw him as both role model and bold spokesperson unafraid to confront the issues of overdevelopment and those who would encourage it.

Markle was also an accomplished writer and musician with Whitey Markle and the Swamprooters, performing at festivals all over North Central Florida and featuring a dozen of his original recorded songs written in the “Florida Cracker” genre. His book, Whitey Markle’s Recipes with Tales and Tunes, is an example of folksy intelligence and downhome humor equivalent to the Foxfire series of life in Appalachia. 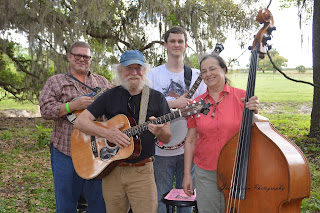 What many didn’t know is that with his Masters Degree in Urban Planning from the University of Florida, Markle also taught Building Trades, Structures and Soils Labs and Woodshop for the McPherson School in Ocala; a State of Florida Correctional Institution; and the Dept. of Architecture at UF. Markle’s work on his Masters thesis ultimately resulted in the establishment, by ballot initiative, of a noise curfew on airboat noise in Alachua County in 2010. Markle’s efforts to restore the Oklawaha River to its natural state was among his most ardent efforts, even inspiring an original recorded song written by Markle himself. 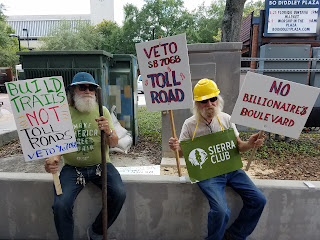 The recipient of a host of awards by a various conservation organizations, Markle was recently honored in San Francisco by the National Sierra Club for Special Service for his conservation work.

“Nobody loved Florida’s wildlife, rivers, springs, forests and coastal islands more than Whitey Markle, and no Floridian was a stronger environmental advocate than he. His fellow hikers, paddlers and conservation activists in Florida are in deep mourning with his passing, but we are also dedicated to carry on his work.  I can think of no better way for all of us who were inspired by Whitey to complete his mission than to secure removal of the Rodman Dam and restore the natural flow of the Ocklawaha River.”

Markle is survived his daughter Carrie Markle Thomas, three grandchildren, brother Conrad Markle of Jacksonville, and long-time, devoted companion Harriett Jones of Williston and many, many friends. Plans are underway for a Celebration of Life for Whitey Markle on the Oklawaha River in the near future. Details will be posted on the Sierra Club, Suwannee-St. John’s Group website and Facebook pages in the near future.