88.5 WMNF has published the following text and videos about phosphate mining in Florida and the devastation that goes with it.  For a complete audio of the broadcast, go to this link.

We look at phosphate mining in Florida: what it’s used for, how it’s mined and its effects on the environment, water and public health.

The first half of the show is a presentation by Andy Mele. He’s vice chair of the Manatee-Sarasota Sierra Club group and spoke last week at the Ale and the Witch in St. Petersburg as part of a lecture series called Ales and Wild Tails. 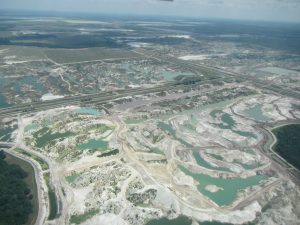 Phosphate mining in Florida. By Jacki Lopez (used with permission).

He spoke about effects of phosphate mining in Ft. Meade, Riverview, Mulberry and Progress Village, near Tampa.

Mele also spoke critically about the phosphate company Mosaic Fertilizer. I invited Mosaic on the show today but Richard Ghent, the phosphates media contact for Mosaic, wrote, “We respectfully decline your invitation.”

The Manatee County Planning Commission is holding a work session this Thursday morning and Mosaic Fertilizer has items on the agenda related to its Wingate East Mine.