This post by WWALS  poses some serious allegations that Sabal Trail knowlingly withheld information from FERC that seems to be critical and which seems might be detrimental to their efforts to obtain a permit for their controversial  pipeline.

Although this post is much longer than ordinary, it contains a great deal of information that is pertinent to the Santa Fe River basin.

On January 31, 2015 at 07:28PM, jsq at WWALS Watershed Coalition published the following article: 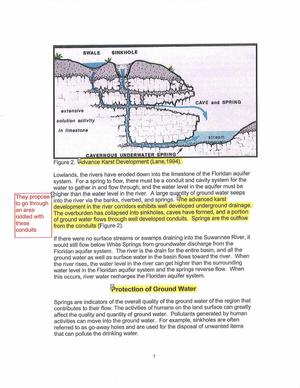 A Suwannee County, Florida landowner points to
newly-discovered connections between springs under rivers
and to other well-known springs
Sabal Trail ignored, adding:

Note that the undersigned is a lay person attorney and NOT a karst expert. Basic research revealed the information contained herein and the omission of this infonnation by Sabal’s purported karst experts
should raise serious questions as to the credibility of Sabal’s filings. 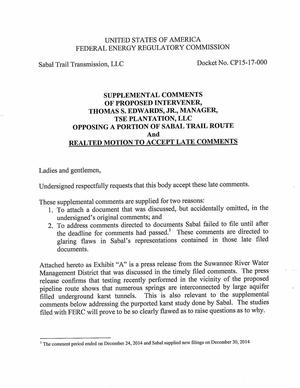 Undersigned respectfully requests that this body accept these late comments.

These supplemental comments are supplied for two reasons:

Attached hereto as Exhibit “A” is

a press release from
the Suwannee River Water Management District
that was discussed in
the timely filed comments. The press release confirms that testing
recently performed in the vicinity of the proposed pipeline route
shows that numerous springs are interconnected by large aquifer
filled underground karst tunnels. This is also relevant to the
supplemental comments below addressing the purported karst study
done by Sabal. The studies filed with FERC will prove to be so
clearly flawed as to raise questions as to why. 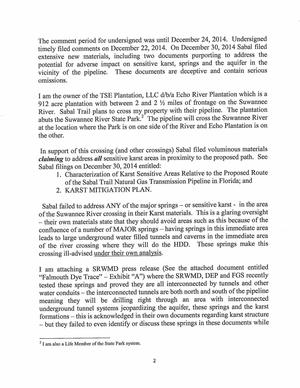 The comment period for undersigned was until December 24, 2014.
Undersigned timely filed comments on December 22, 2014. On December  30, 2014 Sabal filed extensive new materials, including two documents purporting to address the potential for adverse impact on sensitive karst, springs and the aquifer in the vicinity of the pipeline. These documents are deceptive and contain serious omissions.

In support of this crossing (and other crossings) Sabal filed
voluminous materials claiming  to address  all sensitive karst areas
in proximity to the proposed path. See Sabal filings on December 30,
2014 entitled:

Sabal failed to address ANY of the major springs — or
sensitive karst—in the area of the Suwannee River crossing in
their Karst materials. This is a glaring oversight — their own
materials state that they should avoid areas such as this because of
the confluence of a number of MAJOR springs A having springs in
this immediate area leads to large underground water filled tunnels
and caverns in the immediate area of the river crossing where they
will do the HDD. These springs make this
crossing ill-advised under their own analysis.

2 I am also a Life Member of the State Park system. 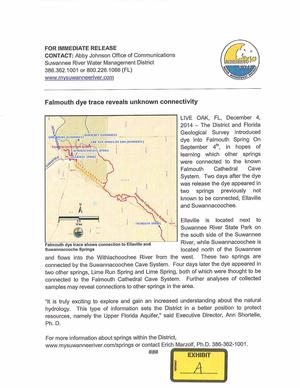 “Falmouth Dye Trace” — Exhibit
“A”) where the SRWMD, DEP and FGS recently tested these  springs and proved they are all interconnected by tunnels and other water conduits 7 the interconnected tunnels are both north and south of the pipeline meaning they will be drilling right through an area with interconnected underground tunnel systems jeopardizing the aquifer, these springs and the karst formations — this is acknowledged in their own documents regarding karst structure
— but they failed to even identify or discuss these springs in these documents while representing to FERC that they were addressing all springs in the vicinity of the proposed pipeline. Why would
these major — well-documented — springs be omitted? 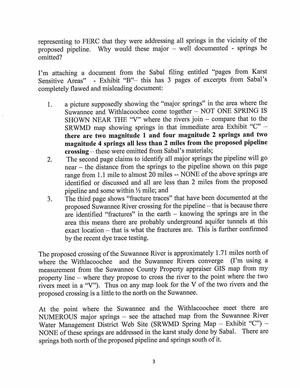 I’m attaching a document from the Sabal filing entitled “pages from Karst Sensitive Areas” — Exhibit “B”— this has 3 pages of excerpts from Sabal’s completely flawed and misleading document: 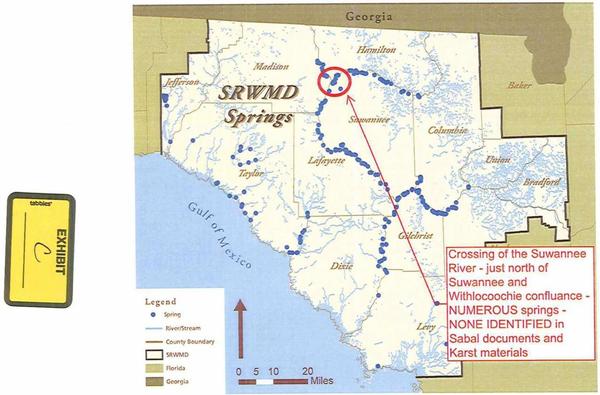 NONE of these springs are addressed in
the karst study done by Sabal. There are springs both north of the
proposed pipeline and springs south of it. 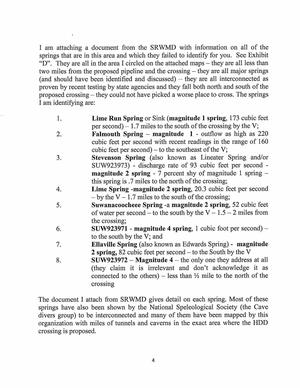 I am attaching a document from the SRWMD with information on all of
the springs that are in this area and which they failed to identify
for you. See Exhibit “D”. 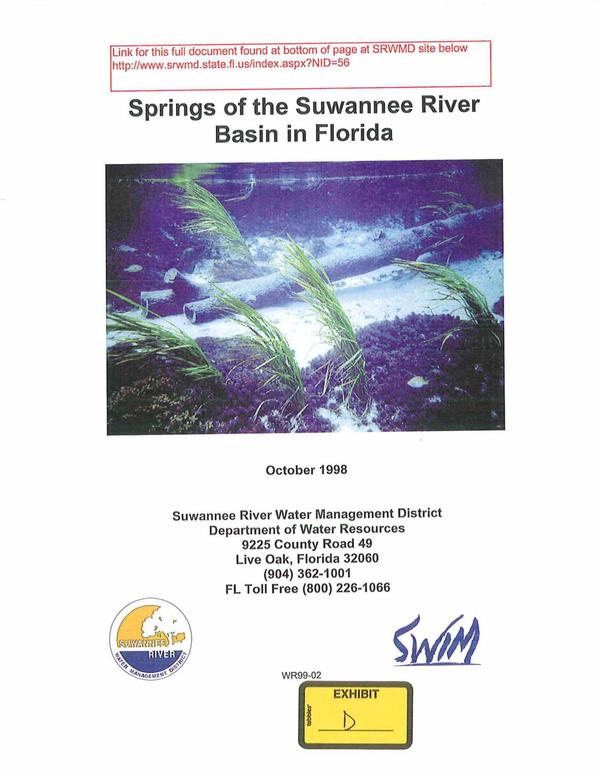 They are all in the area I circled on the attached maps — they are all less than two
miles from the proposed pipeline and the crossing — they are
all major springs (and should have been identified and discussed) 7
they are all interconnected as proven by recent testing by state
agencies and they fall both north and south of the proposed crossing
7 they could not have picked a worse place to cross. The springs I
am identifying are: 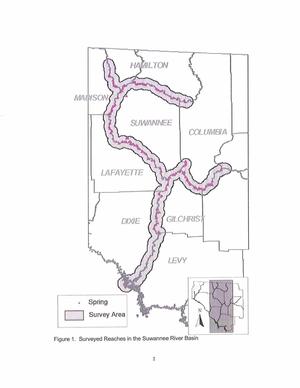 document I attach from SRWMD gives detail on each spring. Most  of these springs have also been shown by the National Speleological Society (the Cave divers group) to be interconnected and many of them have been mapped by this organization with miles of tunnels and caverns in the exact area where the HDD crossing is proposed. 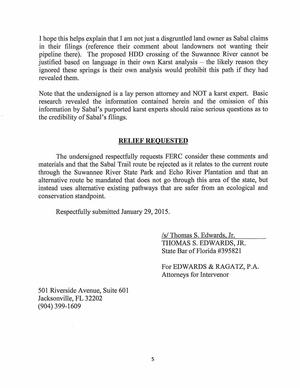 I hope this helps explain that I am not just a disgruntled land owner as Sabal claims in their filings (reference their comment about
landowners not wanting their pipeline there). The proposed HDD
crossing of the Suwannee River cannot be justified based on language
in their own Karst analysis e the likely reason they ignored these
springs is their own analysis would prohibit this path if they had
revealed them.

Note that the undersigned is a lay person attorney and NOT a karst
expert. Basic research revealed the information contained herein and
the omission of this infonnation by Sabal’s purported karst experts
should raise serious questions as to the credibility of Sabal’s
filings.

The undersigned respectfully requests FERC consider these comments
and materials and that the Sabal Trail route be rejected as it
relates to the current route through the Suwannee River State Park
and Echo River Plantation and that an alternative route be mandated
that does not go through this area of the state, but instead uses
alternative existing pathways that are safer from an ecological and
conservation standpoint.

Some more extracts below from SRWMD’s springs document via

What is a Spring?
with commentary in yellow and red by Thomas S. Edwards, Jr. 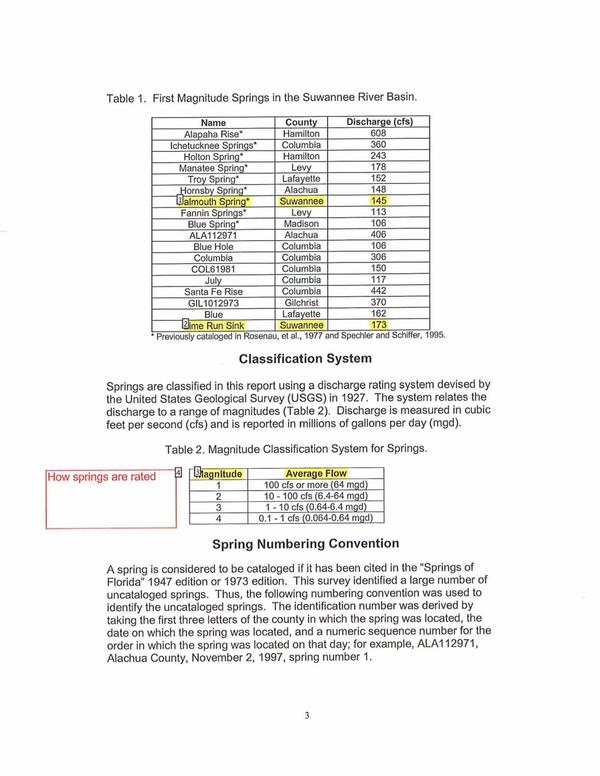 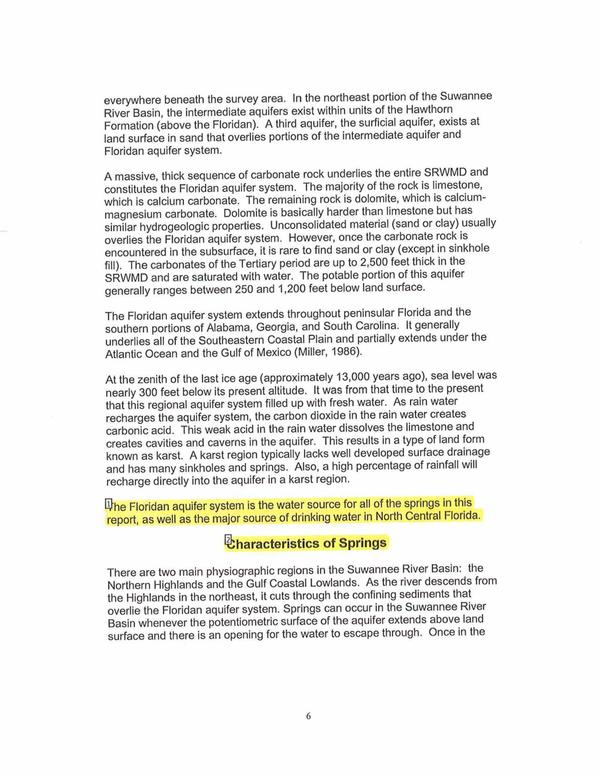 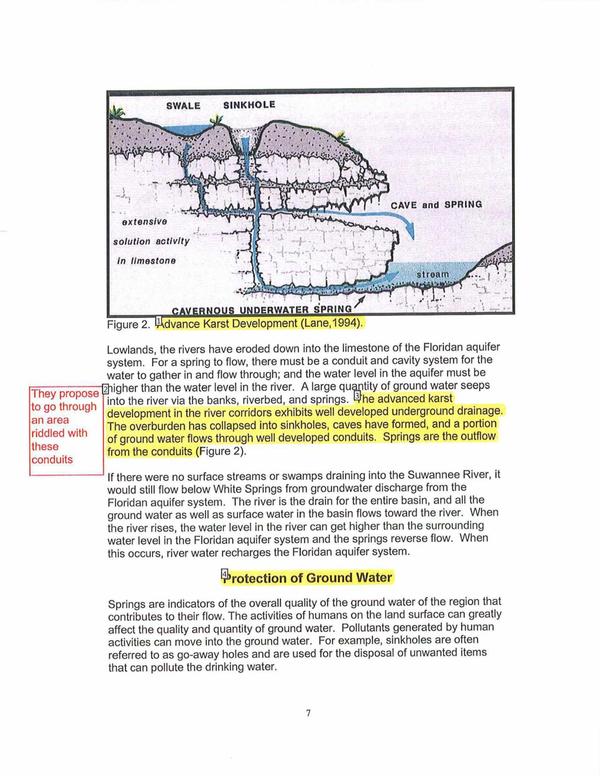 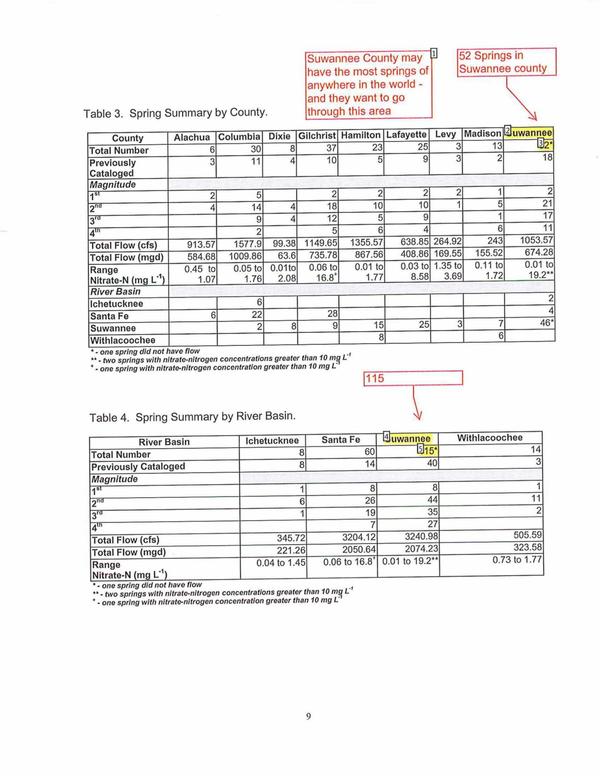 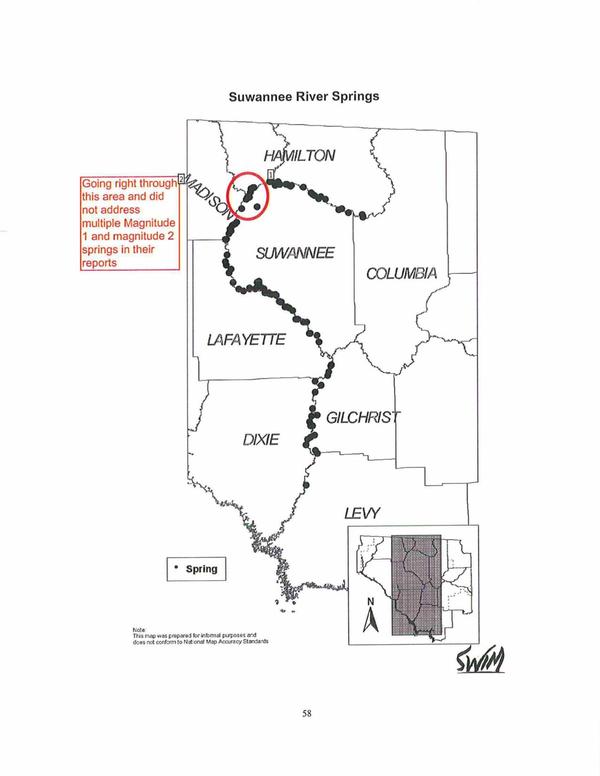 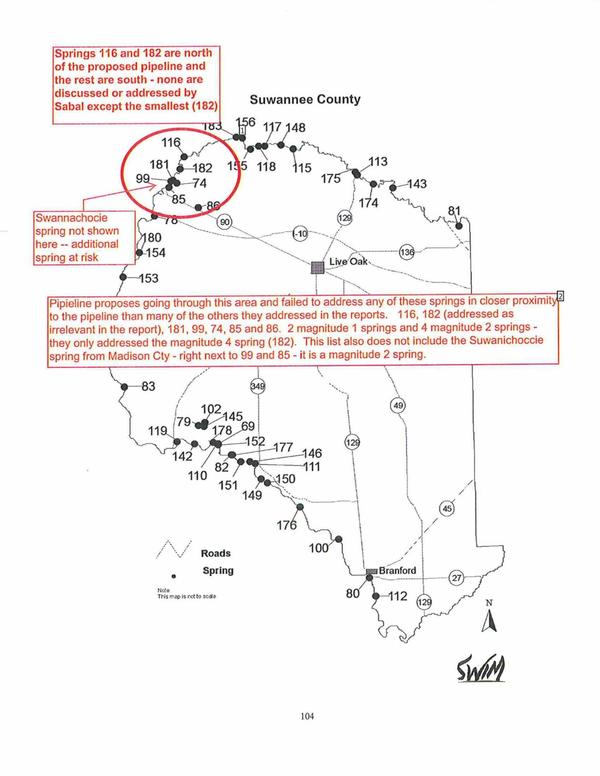 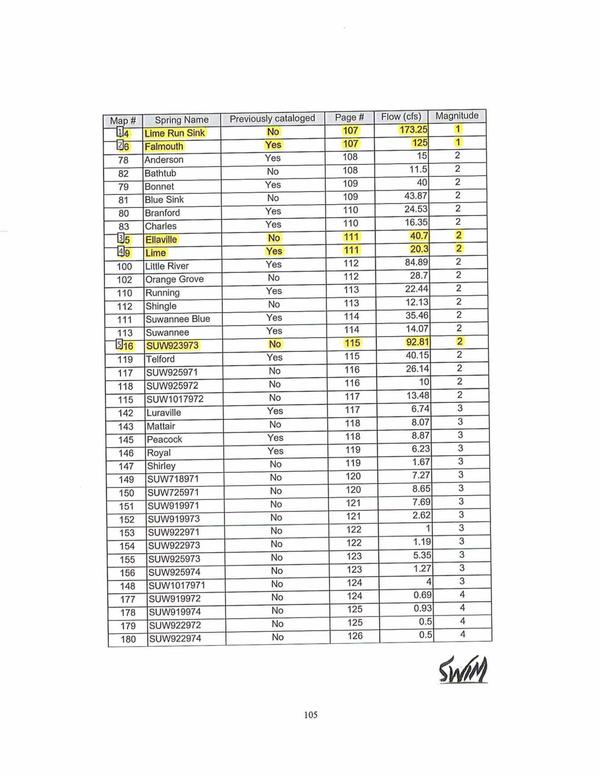 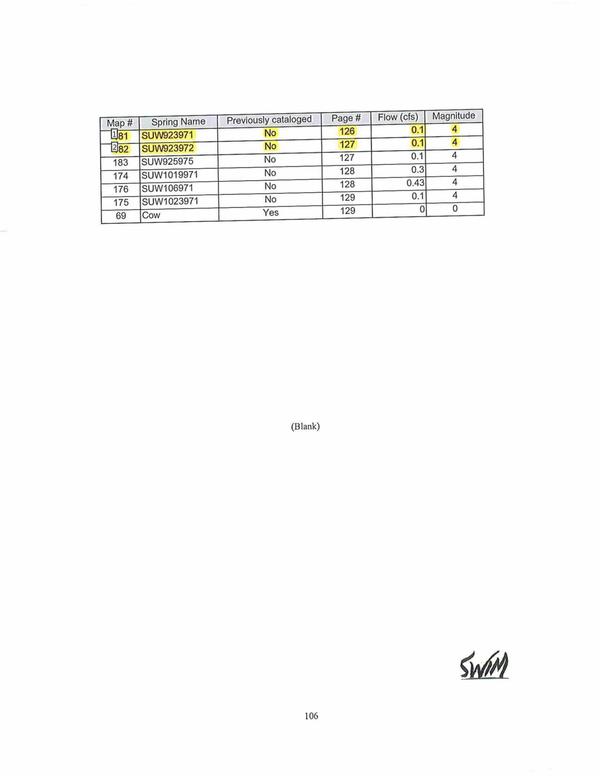 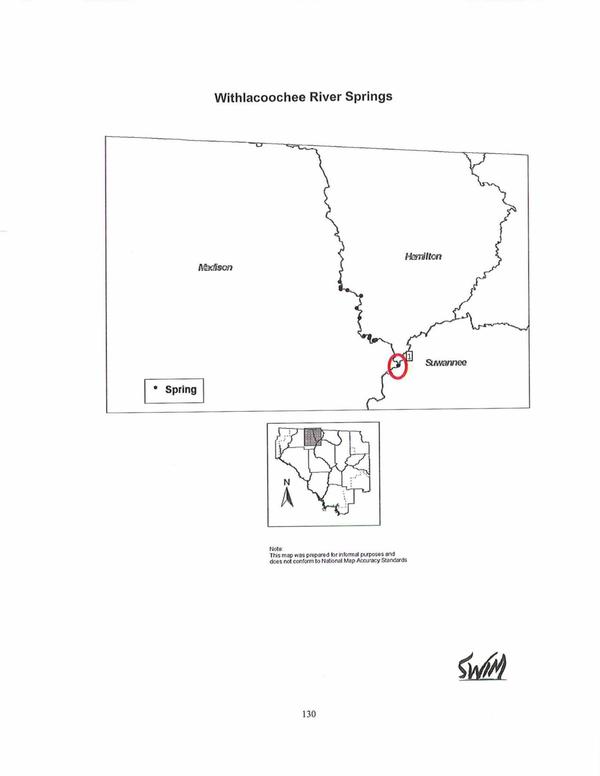 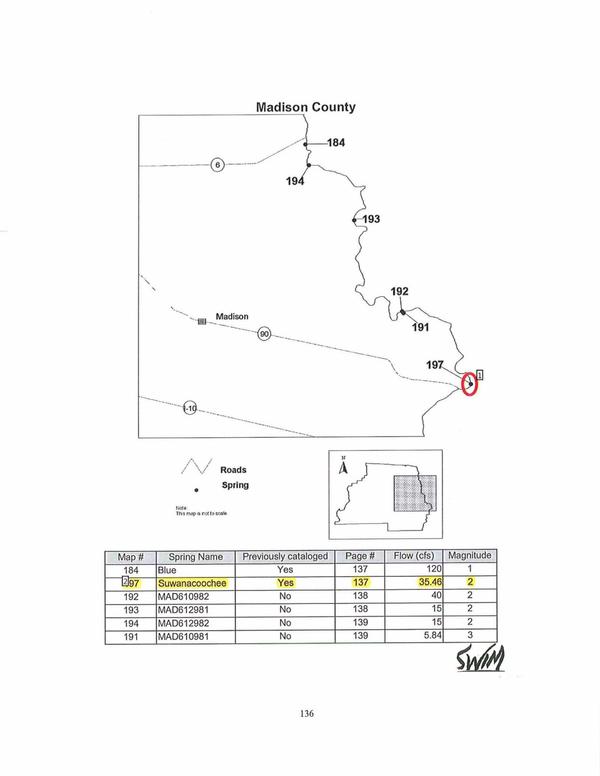 Read this article at WWALS Watershed Coalition at http://www.wwals.net/2015/01/31/sabal-trail-ignored-springs-ignored-underground-connections-tse-plantation/.
Posted via IFTTT

Sierra Club Defends Our Parks From Our DEP