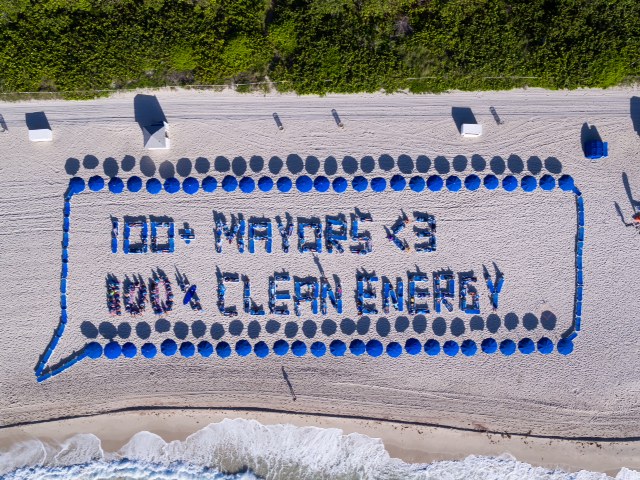 Introduced by the Co-Chairs of Mayors for 100% Clean Energy, the “100% Renewable Energy in American Cities” resolution could pave the way for cities across the country to adopt 100 percent renewable energy targets within their communities.

“By approving this historic measure, we are showing the world that cities and mayors can and will lead the transition away from fossil fuels to 100 percent clean, renewable energy,” said Columbia Mayor Steve Benjamin.  “There is more work to be done to realize this vision for our nation, but this vote represents an important first step towards cleaner air and water for our families, more good-paying jobs in clean energy, and stronger cities across the country. ”
“Mayors are ready for 100 percent clean and renewable energy,” said Salt Lake City Mayor Jackie Biskupski. “Salt Lake City has set the ambitious but achievable goals of generating 100 percent of the community’s electricity supply from renewable energy by 2032, followed by an 80 percent reduction in community greenhouse gas emissions by 2040. We are taking action to achieve these goals and I am honored to join mayors from across our nation to lead the transition to clean, renewable energy.”
According to a new Sierra Club analysis, if cities belonging to the U.S. Conference of Mayors were to transition to 100 percent clean and renewable electricity, it would reduce electric sector carbon emissions by more than that of the five worst carbon polluting U.S. states combined. If the 100 percent energy targets were achieved by 2025, the total electric sector carbon pollution reductions would fill anywhere from 87 percent to 110 percent of the remaining reductions the United States would need to achieve in order to meet the goals of the Paris Agreement.
36 cities across the United States have now committed to transition to 100 percent renewable energy. 118 mayors have signed onto this vision in their community as part of the Mayors for 100% Clean Energy initiative Co-Chaired by Mayor Philip Levine of Miami Beach, Mayor Jackie Biskupski of Salt Lake City, Mayor Kevin Faulconer of San Diego, and Mayor Stephen K. Benjamin of Columbia, South Carolina.
“Climate change may be the challenge of our generation, but it is also the opportunity of a lifetime,” said Mayor Philip Levine of Miami Beach, Florida. “This landmark resolution reinforces our collective resolve to combat the threats of climate change like rising seas by advancing bold and innovative solutions that reflect the best of our nation’s ideals. As host city for this year’s U.S. Conference of Mayors, I am proud to represent Miami Beach and stand with mayors across the country in supporting a vision of 100 percent clean, renewable energy for my community.”
“Clean energy isn’t just the right thing to do, it’s the smart thing to do,” said San Diego Mayor Kevin Faulconer. “We’re going green in San Diego not only because it supports clean air and water, but because it supports our 21st century economy. It makes sense for mayors across the country to work together because when we talk about the future of our planet, we’re talking about the future of our communities.”
“What better way to kick off Donald Trump’s energy week than with a message from our nation’s mayors that cities are ready for 100 percent clean and renewable energy,” said Sierra Club Executive Director Michael Brune. “Cities don’t need to wait for Washington, D.C. to act in order to move the ball forward on clean energy. While Donald Trump props up corporate polluters that are threatening the health of people across our country, mayors are showing that local leaders can and will lead our nation toward a healthier, stronger and more prosperous future powered with 100 percent clean, renewable energy.”
Campaign Name:
Ready for 100