Rick Scott’s legacy (and those of his ilk before him) is found to be worse and worse as time goes on and Florida voters send him on to lead our country. 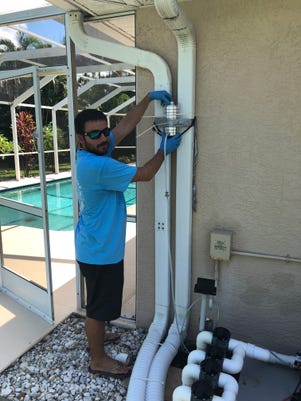 (Photo: Mike Parsons/Special to The News-Press)

What’s not yet clear is what impact that exposure could have to human health, said Mike Parsons, the professor of marine science who coordinated the study.

When there are outbreaks, the Florida Department of Environmental Protection samples water to check what variety of algae are present and how concentrated they are. During the recent bloom, it found one variety of blue-green algae, Microcystis aeruginosa, at levels the World Health Organization considers a high risk of affecting human health.

Blue-green algae toxins, also called cyanotoxins, are some of the deadliest on the planet, “Among the most potent toxins known, far more potent than industrial chemicals,” the late Kenneth Hudnell testified to Congress in 2008. “They cause death at dosage levels in the low parts per billion range … more potent than strychnine, curare (the poison dart toxin) and sarin (a nerve gas).”

Yet unlike many other potentially dangerous substances such as insecticides, dry cleaning chemicals and heavy metals, cyanotoxins aren’t regulated. There aren’t numeric guidelines on how much is too much, said Calusa Waterkeeper John Cassani. ”What dose do you have to get to be subject to risk? Does it build up in the system over time? We just don’t know (and) that’s the overarching issue. This airborne stuff is all new ground. People think, ‘Well, if I just don’t get in the water, I’ll be fine,’ but this is a bigger realm now – it’s the air you breathe.”

In slow-moving or dead-end waterbodies, like Cape Coral canals, the blue-green algae (also called cyanobacteria) piled up in putrid mats “so thick ducks would walk on it and iguanas run across it” Parsons said. And though the resulting stench was chokingly, eye-wateringly foul, there had been no research conclusively showing what scientists call “an airborne vector for microcystin exposure.”

FGCU’s study changed that. With a $5,000 grant from the National Centers for Coastal Ocean Science, part of the National Oceanic and Atmospheric Administration, Parsons and his team used two $9,000 devices on loan from Yale University to detect the presence of microcystis with DNA sequencing.

They tested two spots: a Cape Coral home along the Caloosahatchee, where the bloom was intense, and at Vester Field Station in Bonita Springs, 30 miles away, where there was no bloom.

The team tested from Sept. 21 to Oct. 11, also collecting water samples before and afterward.

The devices were equipped with layered filters that mimicked the human respiratory system.

“The way the sampler works is it has different size passages,” Parsons said, “so you have big openings on the top and then really small openings on the bottom that simulates a human lung.

“The largest pore sizes would be like the nasal passages and the mouth, then the pharynx, then down into the bronchi, then the last three pore sizes would be down in your air sacs – your alveoli … really, really tiny — smaller than bacteria (and) basically, we found microcystins in all the size fractions. They got all the way down.”

But whether that rises to the level of a public health crisis is another matter, because the microcystin concentration was the same at both sites, Parsons said.

“The two possibilities are: We’re just looking at a background level, or normal concentrations of microcystins in the air,” Parsons said. “Or, the other possibility is (and I’m looking at the wind data from Page Field right now) would be that the microcystins actually blew southward so you basically have a plume that made it to Vester,” which he doubts is the case, because the concentrations are the same. “That doesn’t really support that because you’d expect some sort of dilution factor.”

Parsons’ study comes on the heels of another done by Florida Atlantic University’s Harbor Branch Oceanographic Institute last month, which took samples of blood, urine and nasal secretions from volunteers to test for algal toxins. 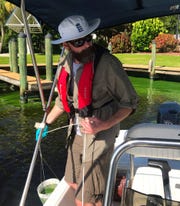 Researcher James Metcalf pulls up a sample of water from a North Fort Myers canal. He was on the Caloosahatchee researching toxic blue-green algae (cyanobacteria) that’s been blooming in the river since June. (Photo: Amy Bennett Williams/The News-Press)

As for the health effects, “That’s got to be the subject of another study,” Parsons said. “This is a pilot study — basically a demonstration project … On one hand, the results were interesting and puzzling, on the other hand I was a little relieved,” he said. “People could sue, you know, if these levels were really high, and right now, they’re not.”

However, Parsons urges residents to be careful if and when another big bloom happens.

“For caution’s sake, they may want to stay away or work to get the cyanobacteria out of their canals,” he said. “It’s probably not a good idea to be sitting there inhaling it if you’re living right on the canal. Better to be safe than sorry.”