Greenhouse Gas Emissions Accelerate Like a ‘Speeding Freight Train’ in 2018

For all we are doing to slow global warming, it is not nearly enough.  We are losing the battle.

Read the original article here in the New York Times.

Scientists described the quickening rate of carbon dioxide emissions in stark terms, comparing it to a “speeding freight train” and laying part of the blame on an unexpected surge in the appetite for oil as people around the world not only buy more cars but also drive them farther than in the past — more than offsetting any gains from the spread of electric vehicles.

“We’ve seen oil use go up five years in a row,” said Rob Jackson, a professor of earth system science at Stanford and an author of one of two studies published Wednesday. “That’s really surprising.”

Worldwide, carbon emissions are expected to increase by 2.7 percent in 2018, according to the new research, which was published by the Global Carbon Project, a group of 100 scientists from more than 50 academic and research institutions and one of the few organizations to comprehensively examine global emissions numbers. Emissions rose 1.6 percent last year, the researchers said, ending a three-year plateau.

Avoiding that threshold — already considered challenging — is viewed as a way to stave off some of the worst effects of climate change, like melting polar ice caps and rising sea levels. For the Paris goals to be met, scientists say, global emissions from power plants, factories, cars and trucks, as well as those from deforestation, would need to swiftly begin declining to zero.

President Trump, however, has vowed to pull the United States out of the accord and has moved to roll back Obama-era regulations designed to limit emissions from vehicle tailpipes and power-plant smokestacks. On Tuesday he wrote on Twitter that the Paris Agreement was “fatally flawed” because its system of voluntary pledges let other countries off the hook, adding that “American taxpayers — and American workers — shouldn’t pay to clean up others countries’ pollution.”

An American withdrawal would represent a serious blow to the pact. The United States, one of the wealthiest nations in the world, is responsible for a third of all human-caused carbon emissions to date, more than any other country. China is now the largest emitter of heat-trapping gases.

The new report comes as delegates from nearly 200 countries are meeting in Poland to debate their next steps under the Paris climate agreement. Many nations haven’t been meeting their self-imposed targets. 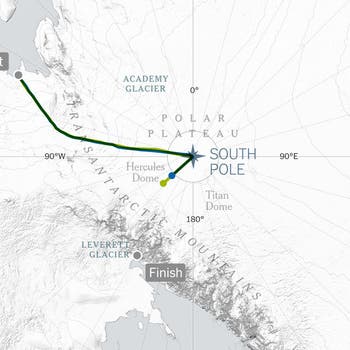 Tracking the Race Across Antarctica

The new assessment is the third major scientific report in recent months to send a message that the world is failing to make sufficient progress to avoid the worst effects of climate change.

Last month the White House published findings by 13 federal agencies predicting that global warming could knock hundreds of billions of dollars off the size of the American economy by century’s end, particularly by disrupting trade and agriculture. And in October, the Intergovernmental Panel on Climate Change, a United Nations scientific group, issued an alarming report warning that emissions are rising at a rate that will open the door to widespread food shortages, wildfires, coastal flooding and population displacement by 2040.

As part of the latest report, scientists wrote Wednesday in the journal Nature that the recent rise in global emissions, combined with other factors such as natural temperature fluctuations, could bring those dire consequences a decade sooner, by 2030.

“For those of us that work in this space, seeing the rates of emissions accelerate is deeply dismaying, and it confirms the very clear lack of systemic action and change that we’re seeing across many lines of state, national and global organization,” said Sarah E. Myhre, a research associate at the University of Washington who was not involved in the studies.

“It just means that the problem will be harder to fix down the line,” she said. “We’re continuing to buck-pass this problem to our kids and our future selves.”

The analysis found that the world is on pace to release a record 37.1 gigatons of planet-warming emissions in 2018, led in large part by China, the United States and India. That is roughly 100,000 times the weight of the Empire State Building.

What on Earth Is Going On?

Even as coal has fallen out of favor in some markets, the rise in emissions has been driven by stronger demand for natural gas and oil, scientists said. And even as the use of renewable energy like solar and wind power has expanded exponentially, it has not been enough to offset the increased use of fossil fuels.

“We thought oil use had peaked in the U.S. and Europe 15 years ago,” Dr. Jackson said. “The cheap gasoline prices, bigger cars and people driving more miles are boosting oil use at rates that none of us expected.”

More investment will be needed in the transportation sector to cut pollution, said Corinne Le Quéré, a professor of climate change science and policy at the University of East Anglia and lead author of one of the new studies. “We have electric cars, but we need charging points, we need to lower the costs of electric vehicles,” she said.

China produces 27 percent of global emissions, according to the report. The United States accounts for 15 percent of emissions, the European Union 10 percent and India 7 percent.

China’s emissions are projected to rise 4.7 percent in 2018, the report said. The country is stimulating manufacturing to counterbalance its slowing economy, allowing more coal-based manufacturing that it had avoided in the past, Dr. Jackson said.

China is investing heavily in renewable energy, but it is also building new coal-fired power plants at home and planning others in new markets such as sub-Saharan Africa.

United States emissions are expected to rise 2.5 percent this year after several years of declines, and despite a shift away from coal toward cleaner sources of energy. Dr. Jackson attributed part of the increase this year to a colder-than-normal winter in some parts of the country and a hotter summer in other parts, which inflated demand for heating and cooling.

In India, a projected emissions increase of 6.3 percent is linked to the country’s effort to provide electricity to 300 million people who currently lack it.

Emissions in the European Union are expected to decline by 0.7 percent this year, but the bloc averaged a 2.2 percent annual decline last decade. The weaker number was attributed to an increase in oil consumption linked to transportation.

The earth has already warmed 1.8 degrees Fahrenheit (one degree Celsius) above preindustrial levels. The effects of that warming could be seen this year across the United States, from the wildfires that raged in California to the hurricanes that buffeted the Southeast. The warming climate did not cause the individual weather events, but scientists say it created conditions that increased their likelihood.

Dr. Jackson said the new report was “not good news,” but added that it still contained “some glimmers of hope,” particularly about air pollution associated with the burning of coal for fuel. “Coal use has dropped 40 percent in the United States, replaced by natural gas and renewables,” he said. “That’s saving lives as well as helping the climate problem.”

*Daytime traffic amid smog in Beijing on Sunday. China produces 27 percent of global carbon emissions, the most of any country.CreditCreditWu Hong/EPA, via Shutterstock

Kendra Pierre-Louis is a reporter on the climate team. Before joining The Times in 2017, she covered science and the environment for Popular Science. @kendrawrites