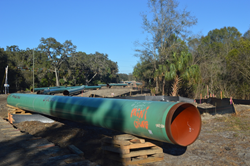 The virtue and value of property rights is protected when we allow juries to measure the compensation when property is taken without the consent of the owner. This is true in takings by government and, perhaps, even more so when the power…is borrowed by a for-profit company, like Sabal Trail.

Allegedly, this is the first jury trial in which property owners have challenged Sabal Trail regarding the measure of compensation for the taking of both temporary and permanent easements as part of its 516-mile natural gas pipeline project spanning Alabama, Georgia, and Florida.

According to court documents, landowners Chuck and Jan Sunderman had their 40-acre tract of land in Bay Lake, Florida, split down the middle by Sabal Trail’s natural gas pipeline a distance of 1,336 feet. Sabal Trail, owned by Spectra Energy, NextEra Energy, and Duke Power, explains on its website that the company will use the 36-inch diameter pipe with a maximum operating pressure of 1,456 psig to transmit up to 1 billion cubic feet of natural gas a day to powerplants in Florida owned by Duke Energy and Florida Power & Light.

Court documents reflect that Sabal Trail filed its eminent domain case against the Sundermans in March, 2016, and that, soon after, the company was granted immediate possession of the condemned easements to begin its pipeline construction. Although unable to stop Sabal Trail from taking their land, the Sundermans have had to litigate over the measure of compensation for the past two years.

With respect to valuation, court documents show that Sabal Trail contended that because its pipeline is buried 4 feet underground, there are no damages to market value other than for bifurcation. More specifically, Sabal Trail contended that there are no damages to market value based on market fear or stigma. In light of this, the Sundermans, for instance, received an initial offer of $56,800 by Sabal Trail for the right to use the temporary and permanent easement areas and a 25% damage to their remaining property. The damages, however, were only attributable to bifurcation.

In discovery, court documents show how lawyers from Brigham’s firm found out that Sabal Trail paid 3 appraisal firms in excess of $8.0 million to prepare studies to show that market participants do not distinguish natural gas pipelines from other pipelines that, say, transmit water. Through depositions, they also uncovered that the 3 appraisal firms had long-standing track records working for pipeline companies, always finding in their studies that there is no difference in the amount buyers or sellers transact on land with or without pipelines.

In response to Sabal Trail, court documents show that Brigham had the Sundermans retain their own appraiser, Matthew Ray, MAI, to prepare a damage study. Ray proceeded to put together a study using a technique which appraisers call “Paired Sales Analysis.” It calls for the appraiser to compare sales of impact and non-impact properties, similar in all respects, except one has a pipeline and the other does not. After researching data in six Florida counties, Ray published his opinion in court documents estimating that the measure of compensation for the Sundermans was $310,000, considering a 60% damage for not only bifurcation, but also for aesthetic loss, loss of privacy, public fear, and stigma relating to Sabal’s easement.

Two weeks ago, Brigham’s firm was able to proceed to a jury trial on behalf of the Sundermans. As reflected in the court’s docket, the jury rendered a verdict in the amount of $309,500. This, of course, is over five-times the amount offered by Sabal and $500 less than Ray’s estimate. After trial, Brigham stated, “The virtue and value of property rights is protected when we allow juries to measure the compensation when property is taken without the consent of the owner. This is true in takings by government and, perhaps, even more so when the power of eminent domain is borrowed by a for-profit company, like Sabal Trail.”
_____________________
Brigham Property Rights Law Firm (http://www.propertyrights.com) devotes its practice of law to the representation of private property and business owners in matters of eminent domain, property rights, and real estate litigation. Based in Jacksonville, Florida, Brigham Property Rights Law Firm has built a statewide and national reputation for zealous protection of property rights and for skillful advocacy in pursuit of constitutional just or full compensation.