“I am confident that the avoidance graphic articulates our promise to protect and preserve Florida’s environment, while also planning for the state’s inevitable future growth,” said DOT Secretary Kevin J. Thibault.

Here we have the newest M-corese euphemism, the key word “avoidance graphic.”

This is akin to the Department of Environmental Protection using the word “take” meaning “to kill,”  for an unlucky bird or animal which happens to be in their way for whatever reason.

And no, we do not share the confidence of DOT Secretary Kevin J. Thibault that this promise will be kept.  On the contrary, we do have confidence in the words of Sarah Gledhill who says these unneeded roads will bring development sprawl in the misnomered “avoidance” areas.

Why? Because over and over again we have seen our agencies in Tallahassee  ride roughshod over environmental issues and give precedence to the dollar bill.  The environment (and even people’s health) are considered expendable when compared to money being made–this is the Tallahassee protocol.

Unfortunately, lower level local governments are also not immune.  Go to this link to see shameless greedy “leaders” who break their word and quickly forget former promises when money shows up.  This is exactly why government promises are less than meaningless.

Florida transportation authorities released a map this week showing areas designated for little or no damage from construction of three new highways through rural parts of Florida.

These apparently did little to allay fears that the massive projects will destroy the state’s last wild and rural landscapes.

The map, called an “avoidance graphic,” indicate sites where the Florida Department of Transportation intends to avoid disturbances when the proposed highways are built.

“I am confident that the avoidance graphic articulates our promise to protect and preserve Florida’s environment, while also planning for the state’s inevitable future growth,” said DOT Secretary Kevin J. Thibault.

However, critics warn that avoiding the most sensitive sites will not protect the targeted regions because the highways are specifically intended to promote development.

“No one should be fooled by FDOT’s maps. There will be massive secondary impacts from converting wildlife habitat and agriculture lands into more subdivisions and asphalt,” said Sarah Gledhill, senior Florida field campaigner with the Center for Biological Diversity.

“The suburban sprawl that will follow will eat up Florida’s wild and rural landscape. And once they’re gone, they’re gone forever.” 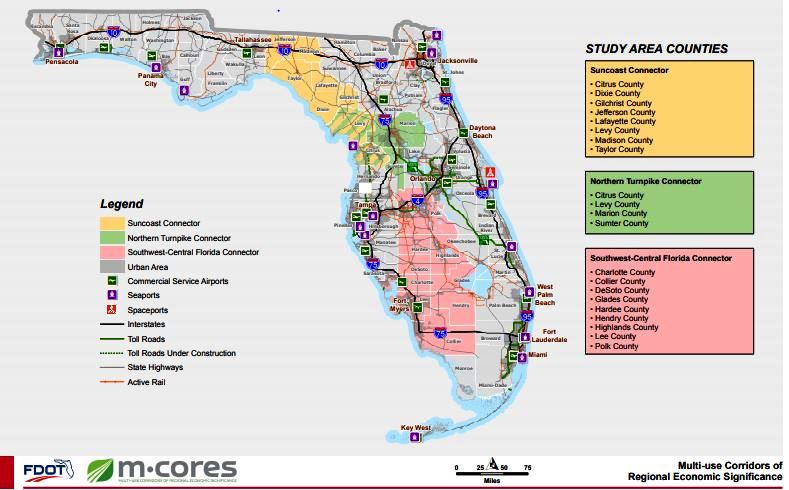 The proposed highways – called Multi-Use Corridors of Regional Economic Significance, or M-CORES – are:

– The Suncoast Connector, extending from Citrus County to Jefferson County.

– The Northern Turnpike Connector, extending from the northern terminus of Florida’s Turnpike northwest to the Suncoast Parkway.